This article is a stub. You can help Communpedia by expanding it.

Nikita Khrushchev succeeded to the leadership 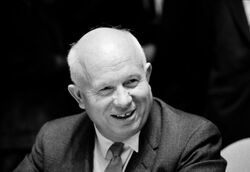 of the Soviet Union after Stalin's death in 1953, and retained it until he lost control to Brezhnev and Kosygin in 1964. There are a number of aspects of his career that deserve special treatment as a result of their bearing on the specifically Communist aspects of the Soviet Union, and which should eventually be expanded on here.

Obviously there's a lot of additional material that could be covered, such as Khrushchev's support of Stalin prior to 1953. However, there's a great deal of material about Khrushchev already available, and the aspects which are most interesting to cover in this article would be the ones bearing directly on Khrushchev's management of the economy and to what extent he adhered to Communist economic principles.

Retrieved from "https://communpedia.wikia.org/wiki/Nikita_Khrushchev?oldid=15137"
Community content is available under CC-BY-SA unless otherwise noted.